You are here: Home / Jason
Jason Mylroie – a 7 Handicap (when he started).

Jason only did one session with me, and the following day went out and shot 73! By all accounts from those playing with him on that round – “It was like watching a Pro.”

Jason, as a 7 Handicap , already had a great swing as one would expect… the Samurai Swing helped him to full extend the right arm through the strike zone as well as using the blade edge as a vision guide to see the “cutting” edge coming through the strike zone. Being able to see that blade allowed Jason to slow his swing down and immediately gain more control. When we start, he was drawing the ball – starting on line and ending left of the target line – when we are finished , he was starting the ball slightly right of target line and drawing it perfectly back to target line – and it was amazing to watch. 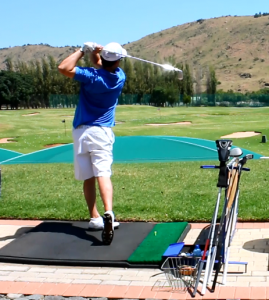 “Being taught to swing a golf club using a samurai sword has completely changed my game. What was supposed to be a lesson to help my father play better turned into a revelation for my game too.
As a single figure handicap and someone who practices quite often, I thought that I was headed in the right direction, however, the samurai golf concept completely changed my way of playing the game both mentally and physically.

My swing dynamics have changed and I now hit the ball further and straighter with much less effort.

The biggest positive that came out of the lesson however, was the way in which I have now changed my thoughts before during and after the swing. It has become as easy as one swing though, stepping up to the ball, aligning myself and swinging easy.

And the results were immediate. I played six rounds in eight days following my lesson and dropped two shots off my handicap that week.

This samurai golf swing concept works for all skill levels and will definitely make the game more enjoyable for everyone.”